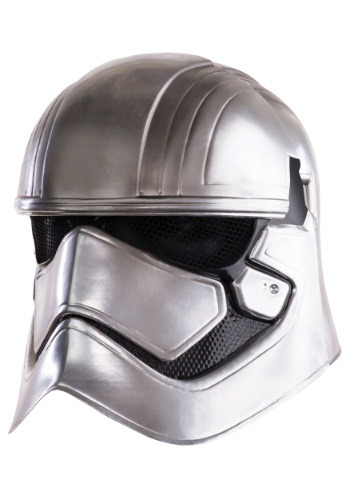 The Stormtroopers in almost every incarnation of Star Wars have given us a pretty clear image.  We had several words that we could have used to describe them… usually ones that veer pretty close to “blind” or “aim challenged.”  Now, we have come to recognize that perhaps there were problems with the optics in their helmets.  Maybe it was a genetic whoops from too many clones.  Perhaps the Empire just didn’t take the time to really train all of their freely obtained galactic police.

But, all of that changed when the First Order put Captain Phasma in the lead.  Woah!  Suddenly, those Stormtroopers went from a laughable crew of identically armored clones who were roughly as threatening as multicolored holiday lights to a group of terrifying fighters who could bring ruin and devastation to a village in no time!  Of course, it all comes from the ferocious look of Phasma and her silver domed helmet.  And, we think it is time that you bring the same kind of unwavering command with this adult Star Wars Episode 7 Deluxe Captain Phasma Helmet.  Glare through the mesh-covered eyes of this officially licensed two-part helmet and bring victory to the Empire for once and all!