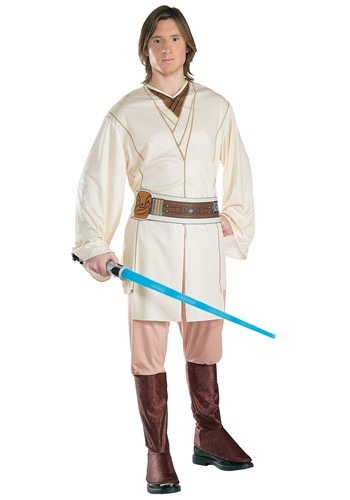 Every heroic mentor begins somewhere.  Typically, we only get to imagine where that beginning might have been.  What would a youthful Merlin have been like?  How about youngster Gandalf?  The early days of Picard or Kirk?  Just think about when Yoda might have been a Padawan!?  Seriously, TV and Movie Gods, these are things we need to know!  Help a geek out!

At least a few of our curiosities have been answered thanks to the Star Wars prequels.  While our first actual introduction to “Kenobi” was that of an old man hiding away on Tatooine, quietly watching over the offspring of his most conflicted of former friends, we would one day see a rather studly looking Obi-Wan flipping over obstacles and doing his best to actively save the galaxy from the looming threat of the Dark Side.  Of course, he wasn’t always the disciplined mind that we saw even in his bearded flipping days.  Makes us suspect that he might have learned a bit more from his troubled Skywalker friend than we initially suspected.  Because, when he was just a Padawan and still earning his first set of robes, our centered Obi-Wan Kenobi was just as passionate and quick to act as he would one day warn everyone else about!

Let’s head way back to the beginning and see the power of youth with this Young Obi-Wan Kenobi Costume from the Star Wars prequels.  This white Jedi Gi has all the detailing needed to show off that ancient-past yet futuristic look of monk meets space wizard and the faux leather boot covers make for an adventurous look even if you’re secretly wearing sneakers.  Don’t forget to pick up your lightsaber and decide if you’re going to be the aggressively inquisitive Padawan of Episode 1 or the disciplined heroic Jedi of Episode 3!  Get a goatee and transform throughout the night!?