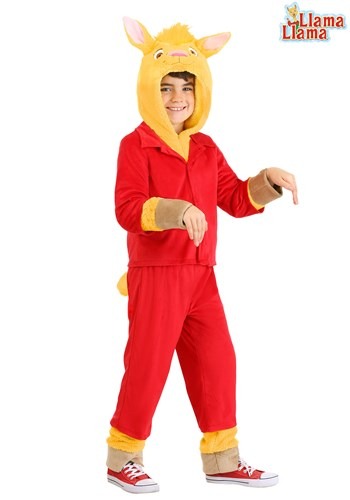 We all emphasize with the moment that poor Llama Llama goes through in Llama Llama Red Pajama. It's dark, it's scary, it's tough to go to sleep without your mama when you're just itty bitty! But after Llama Llama's bedtime crisis, what do you think he dreams about? Do you think that he dreams that his bedtime struggle becomes a picture book beloved by children all over the world? How about a picture book that's rapped, sung, and recited all over the internet? Hmm, probably not. He's probably dreaming about grassy fields,  butterflies, and breakfast. Still, we hope that little llama knows how much we appreciate him. Just in case he doesn't, our in-house creative team designed this Llama Llama Red Pajama Costume to celebrate the lonely llama and his red PJ's!

This officially-licensed Llama Llama Red Pajama Costume is Made By Us which means it's made for playtime long past Halloween night! It's also exclusive, which means you won't find it anywhere else! The cozy costume is perfect for chilly Halloween nights! It features a fur top that zips up the front and is topped off with a sculpted llama hood that features Llama Llama's sweet expression. The matching pants have an elastic waistband and adorable llama tail in back! The perfect costume for pajama day at school, reading events, or simply playing around the house, it's sure to get plenty of use long after all the Halloween candy is gone!

If you've read Llama Llama Red Pajama, again and again, this costume may just be the antidote to your repetitive bedtime routine. After all, now your kiddo will be busy creating their own Llama adventures in their new costume. Maybe they'll even tell you about them at bedtime if you ask nicely. Who knows what Llama Llama will do next?