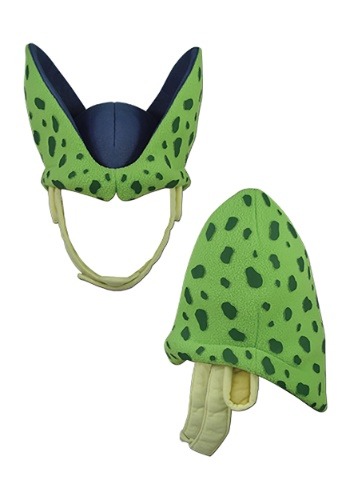 Cell is one bad dude. Need some proof? Well, let’s take a look at the long list of things he’s done. During his time in the Dragon Ball Z anime series he, ate the entire population of Ginger Town, he consumed Piccolo’s arm, he gruesomely absorbed both Android 17 and Android 18. He also toys with the entire fate of the earth by creating the Cell Games. During the games, he kills Goku and by an odd turn of events he ends up blowing up King Kai’s planet.

If Gohan hadn’t gone all Super Saiyan on his butt, the entire earth might be little more than a clump of rubble floating through space. Maybe it’s time that you turned things around for Cell’s reputation. Perhaps the next incarnation of Perfect Cell can be a nice guy?

With this Dragon Ball Z Cell hat allows you to become the devilish villain from the anime series. The hat is made of a soft material and recreates the look of Cell’s V-shaped noggin. It’s green with plenty of spots and it even has a chin strap for fitting.

Now, don’t mess up your chance to rebrand Cell! If you go around trying to absorb androids like the last Cell did, people will definitely become suspicious of you. Gohan might even show up to shoot a Father-Son Kamehameha Wave!