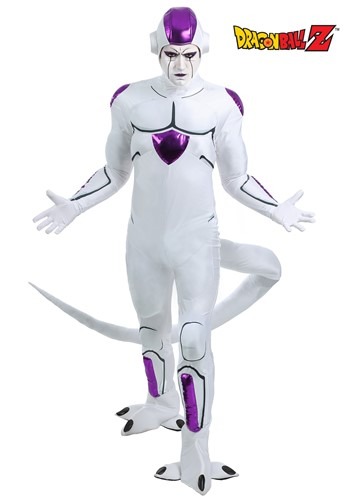 He may have destroyed the entire Saiyan race and he might have blown up Planet Namek, but Frieza isn’t such a bad guy! Why, he’s done all sorts of nice things for people across the galaxy! This one time he was really nice when he…

Alright, so we have nothing. Frieza is one cold-hearted villain who just as soon shoot you with a ki blast than he would to look at you. He’s not the kind of alien that’s going to win any kindness contests, but in a contest of looking totally awesome, that white-clad alien emperor would win in a heartbeat. Now, you can have that kind of power!

This Dragon Ball Z Frieza costume turns you into the deadliest villain that Goku has ever faced! The costume comes with a jumpsuit that faithfully recreates the white and purple color schemes of Akira Toriyama’s creation. The suit stretches to fit and features padding in the chest and arms to give you the muscular look of a seasoned fighter. It even has a tail attached to the back. Of course, the costume comes with a helmet that helps give you the dome-shaped skull of Frieza. It also comes with a pair of foot covers that have three big toes on them to recreate the look of Frieza’s claws.

Once you slip into this outfit, you might feel confident enough to challenge a Super Saiyan to a fight, so please remember that wearing this costume doesn’t actually increase your power level! Don’t go picking fights with Goku or Vegeta!