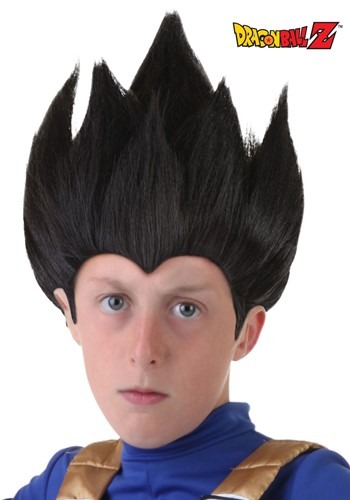 So, your kid has a power level that's well over 9000. Shouldn't his hairstyle reflect that? All we're saying is that most of the really powerful characters in Akira Toriyama's Dragon Ball Z anime series either have bald heads (Krillin, Frieza, Tien) or spiky hair. Unless you want to get out the hair clippers and go cue ball, then we suggest that you get him some spiky hair and there's no better role model for spiky hair than Vegeta.

Yes, the Prince of all Saiyans is the poster child for perfect, spiky hair. That's why we modeled this child Vegeta wig after him. The wig uses synthetic fibers to recreate the style seen in Dragon Ball Z. So, if your child is looking to up his spiky hair game, then this is the wig for him! Just be warned, since this wig may make him feel like picking a fight with Cell!