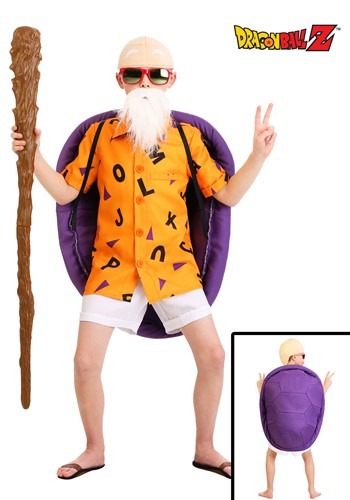 As Young as Ever

How does Master Roshi do it? The guy is around 300 years old, but he's suspiciously spry for his age. He can still perform Kamehameha Wave as well as any of the young whippersnappers in Dragon Ball Z. He once defeated 100 of Frieza's soldiers without breaking a sweat. He also held his own during the Universe Survival Saga, where he fought alongside Goku and Vegeta on Universe 7's team. All that at 300 years old? It's almost as if he's secretly a youngster than never ages... No, that'd be crazy, right? Master Roshi? Just a kid in disguise? It couldn't be!

Well, okay. With this Dragon Ball Z Master Roshi Costume, it wouldn't be crazy! This officially licensed costume is inspired by the Akira Toriyama anime series and it will turn any child into their favorite martial arts master.

If your child is ready to transform into the one and only Master Roshi, then this is the costume for them! It comes with everything your child needs, aside from a lifetime of experience fighting bad guys. It starts with a button-up, short sleeve shirt that has a letter print pattern. It also comes with a pair of shorts that fit with elastic, which are perfect for chilling on the beach at the Kame House. Of course, Master Roshi is known for his cue-ball style, so this costume comes with a foam bald cap that even has his prominent eyebrows on top. The goatee and mustache are made out of synthetic material and they faithfully recreate Master Roshi's facial hair from the manga. The red sunglasses are a Roshi staple which round out the look. Finally, you can't be the turtle hermit without his turtle shell! That's why this costume comes with a big, purple shell accessory that fits on your child's back like a backpack! It all combines for an authentic look that's perfect for any DBZ fan.

The Moves of a Master

Your child can become the oldest fighter on the Dragon Ball Z team! All they need is this officially licensed kid's Master Roshi Costume and some awesome martial arts moves!