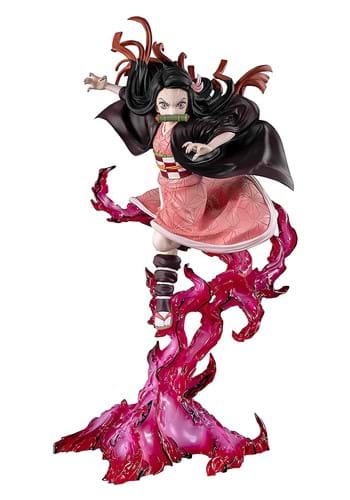 There’s nothing that’ll stop Tanjiro and Nezuko in their pursuit to get Nezuko her humanity back. In the meantime, however, the sibling duo can’t be too mad about her “upgrades.” Sure, spending most of her time in a box as a miniature of herself is probably annoying. But being able to make a miniature of herself is pretty handy. And that nifty hypnosis Urokodaki put on her keeps the sweet sister sweet. Until, of course, it’s time to fight, and her Demon Blood Art is unleashed.

Celebrate Nezuko’s demon form by adding this Bandai Spirits Figuarts ZERO Nezuko Kamado Demon Blood Art Demon Slayer Figure to your collection. The officially licensed statue captures the mesmerizing ferocity of Nezuko’s fighting spirit with close attention to detail. The 3D rendering of Nezuko depicts her lifted above the raging pink flames of her Blood Art, poised to strike. Intricate detailing adds lifelike movement to the fire, Nezuko’s clothing, hair, and her body language. Order the must-have for yourself today to enjoy Nezuko’s demon form as long as possible!