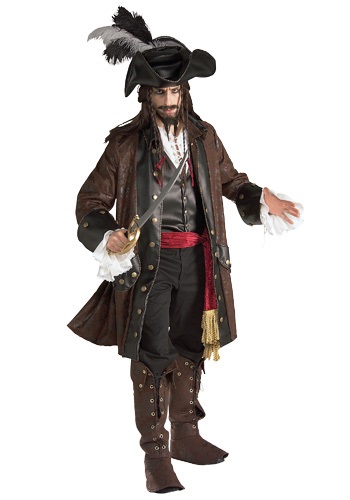 If you are going to be a pirate, the Caribbean is the place to do it! Can you think of anywhere more beautiful to set sail? Every day you'd be sailing emerald green waters, sailing past islands covered in palm trees and coconuts. We aren't sure that we are cut out for the pirate lifestyle, but if we could do it in the Caribbean that would certainly help!

Would you be a pirate if you could? Sail the Caribbean, looking for gold and the fountain of youth? You and your rowdy rough band of pirates would be the most feared in the sea, constantly chased by the royal navy. No one said it'd be easy, but it would definitely be an adventure! So, we will ask you again, do you have what it takes?

This costume looks like a lot of layers, but we have done our best to simplify it! The jacket, shirt, and vest are all one piece of clothing, making this costume much much easier to put on. Then you'll just need to put on a pair of your own jeans before putting on our waist sash and boot toppers! The sash is red and the boot toppers will turn any shoes into seafaring ones! Last but definitely not least is the pirate hat! The hat is black and has black and gray feathers on the top! This hat's a necessity, as it will help protect you from the harsh open ocean sun.

A PIRATES LIFE FOR YOU?

When you go out as a pirate, don't forget to bring a crew! One pirate is fearsome, but a whole pirate crew is downright unstoppable! So, if you want to have some success in your new pirate life, recruiting a crew would be a smart decision!