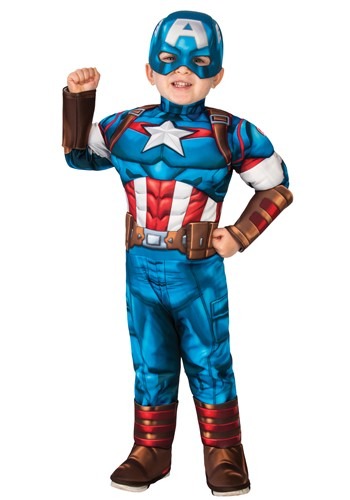 Leadership is a valuable skill to learn at any age. I mean, Steve Rodgers was learning it from a very young age due to his small stature. But Steve has a big brain and a bigger heart, so he took the bullying from his peers and used it to fuel his dreams of serving the red, what, and blue. It's not hard to see why he makes such a great superhero and just a good guy. Who is better an example for your toddler to follow but Captain America!

You could just read the comics or watch the movies, but imitation is the best form of flattery. That means you need to grab a toddler Costume. It's no wonder that you're considering this Captain America costume for your toddler. They've got the same heroic heart. Plus, the way they jump all over the house, they must have gotten their hands on that super serum, too! This Halloween costume consists of an easy-to-put-on jumpsuit and padding to simulate a muscular look. The foam gauntlets make it so your kid can block with the best of them, and the boot toppers make their feet look like they are sporting Avengers grade footwear. And no uniform is complete without a helmet. Have your toddler fighting for the little man with their very own Captain America-Toddler Costume.