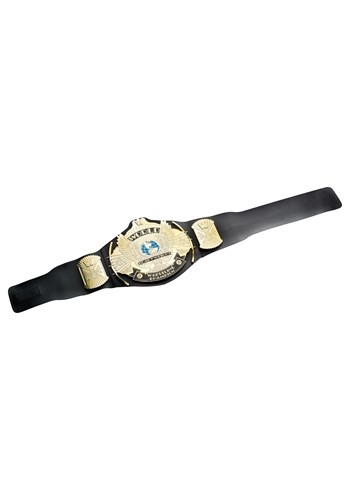 We Were Gonna Be Great

Sometimes, life just passes you by. We always had dreams of grandeur. We were going to take the WWE by storm. We were going to wrestle against Hulk Hogan and Macho Man. We were going to show the Rock that we could smell what he was cooking! We were going to be the champ and we were going to wear that belt around our waist with pride. Then, of course, we realized that we just didn't have the grappling skills or the magnificent muscles of a professional wrestler... life went on and our dream started to fade. But you know, that dream of becoming the champ has always been hanging out in the back of our mind. Now, with this WWE Winged Eagle Classic World Championship Belt, anyone can feel like the champ!

Based on the iconic championship belts worn by the real champs of the WWE, this belt will help you feel like the king of the ring. It fits with a simple hook and loop fasteners in the back and it features a molded plastic medallion in the front. The medallion looks like real metal and features molded wings and has "World Heavyweight Wrestling Champ" inscribed onto it. It might not turn you into the real champ, but for a moment you can feel all the glory of being a WWE star!