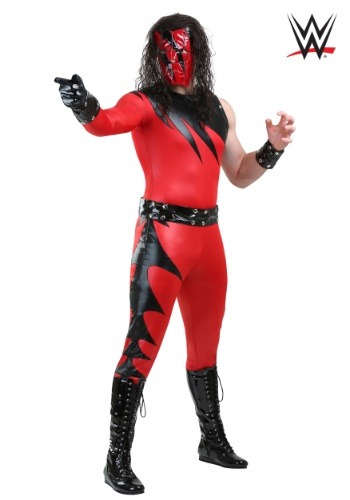 Kane is kind of a big deal.  And we mean that literally. The WWE star is 300 lbs and 7 feet of pure wrestling mass and you definitely wouldn’t want to be the one to face him in a cage match. He’s one of the few guys who has the power to body slam Undertaker and we’re pretty sure that he could lift a tank with nothing but his bare hands!

You might not quite be at Kane’s legendary skill level when it comes to professional wrestling, but you can start honing his signature look when you wear this WWE Kane costume for adults. It’s a plus size costume based on the legendary wrestler and wearing it makes you look nigh unbeatable in the ring.

The costume comes with a bright red full-body jumpsuit that makes you look like some kind of demon that came straight from the depths of hell. It has plenty of black accents, just like the costume worn by Kane in many of his iconic matches. The costume also comes with the black belt and matching glove and gauntlet to round out the outfit. Of course, it comes with the red and black mask, so you can hide your identity as you lay the SmackDown on anyone who’s fool enough to challenge you in the ring.

Make sure to add a pair of black boots to your order to be fully prepared for your big debut in the ring. (And give The Rock a big old body slam for us, will you?)