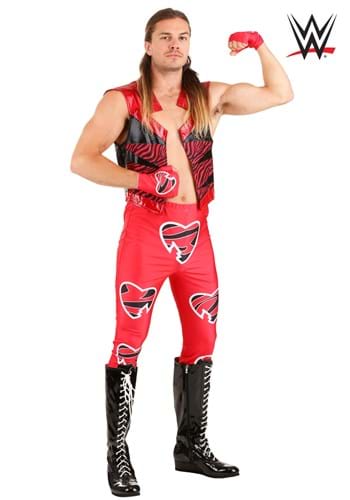 Too Sexy for the Ring

It's amazing that they let Shawn Michaels into the ring. Don't get us wrong, he's got the skills, the physique, and the showmanship to own the ring. The problem is... he's just too darn sexy for the ring. Any time his theme song starts playing and he struts his stuff to the ring, all the girls swoon and all of the other guys are just too distracted by his superhuman charisma. A fair wrestling match just isn't possible when he enters the ring! Then again, not all matches are fair...

If you want to harness your own inner machismo, then this men's WWE The Heartbreak Kid Shawn Michaels Costume is the way to do it. The officially licensed costume is a Made By Us design that captures his signature style during his prime!

This adult costume will help transform you into one of WWE's greatest wrestlers in an instant! The costume comes with 3 simple pieces, a vest, a pair of paints, and a pair of fingerless gloves. The vest is trimmed with black and red vinyl and has a stretch knit back panel. The back also features the phrase "I'm too sexy for this crowd" on the back. The front has red and black zebra patterning, for a look that's prime 90s wrestling attire. The spandex-blend pants are a matching red color and have the Heartbreak Kid symbol printed all over them. Finally, the fingerless gloves really bring the whole look together. The gloves feature heart symbols on the front, so you can showcase your wrestling moves in true Shawn Michaels style!

If you're ready to make your ring debut as one of wrestling's most charismatic fighters, then this WWE Shawn Michaels Costume is an easy choice!