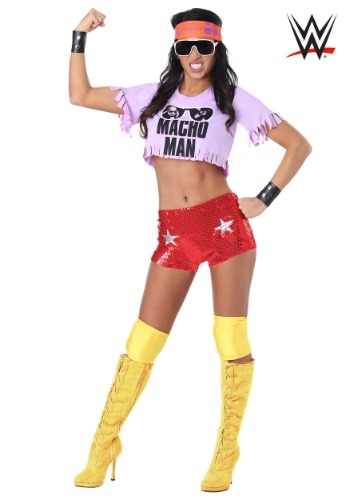 Do You Have the Madness?

Well, it’s easy to see why you’re here. You’ve got Macho Madness written all over your face. We bet that you’re too hot to handle and too cold to hold. You probably think that you’re the cream of the crop. You also refer to yourself as the “Tower of Power” while often touting that you’re too sweet to be sour. You can probably even shout, “OH YEAH!” better than anyone you know. Right now, you’re thinking to yourself, “I could pulverize any challenger who enters the ring with me!”

This officially licensed Macho Man Madness costume is inspired by Randy Savage’s iconic style from the 1980s. It comes with a pink shirt that has Macho Man’s sunglasses printed on the front. It also comes with a pair of red sequin pants that have star accents on them. The orange headband has “Randy Savage” and a pair of sunglasses printed on it. The yellow knee pads add a pop of color and the black wristbands put the finishing touch to the look.

The Cream of the Crop

Once you have this entire outfit on, you’ll feel ready for an exhibition match with any wrestler! Make sure to practice your Macho Man voice and don’t forget to accessorize this with a pair of your best wrestling boots! You’re going to need both if you want to leave the ring as the undisputed champion of the world… the cream of the crop!