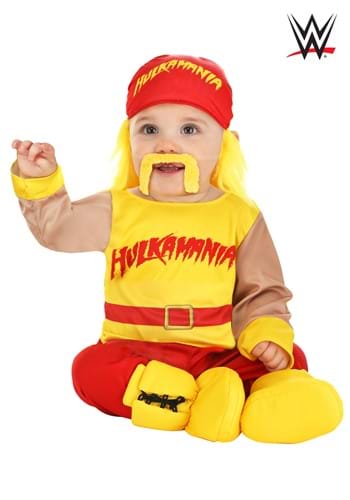 It is said that when Hulk Hogan was born, his poor parents weren’t able to put him the crib with any other babies. He would always end up putting on his wrestling costume and demanding a match with them. Most of the time, that ended with him winning hands down, since he was just too good at wrestling.

That was when they knew what Hulk would become, but they were still powerless to stop him. By the age of two, he could headlock both his parents and demand cookies. By five, he was constantly flexing and practicing the moves that would one day make him the greatest wrestler of all time. That singular dedication is something that any infant in the world today would benefit from emulating!

Finding the cutest costume for your baby is super easy once you see this Infant Hulk Hogan Costume. This “Made By Us” costume was put together by our hard working and careful artisans, so you will feel good about wearing this for years to come. The comfortable and warm shirt and pants that make up this costume are perfectly paired with padded booties and an awesome hat with an attached mullet. The characteristic moustache adds that final touch to make your baby look exactly like the man himself! There is no way that your baby can lose any contest when he steps (or crawls) out of the house in this cute and fun costume.

If you are looking for the cutest little costume for your tiny Hercules, then you are in the right place! There will be no doubt in anyone’s mind that your baby is a winner when he suits up and enters the ring in this cool costume.