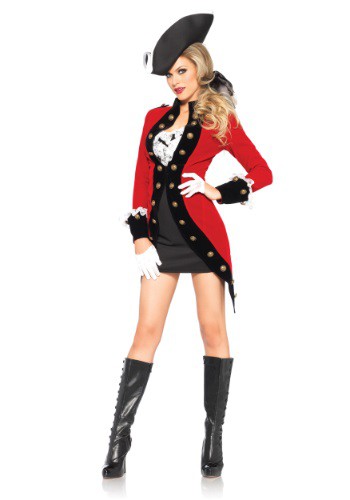 The British are coming!

It turns out that those pesky colonists are stirring up trouble again! This time they had the audacity to declare independence from the British Empire. Well, the King certainly can’t have that, so he’s dispatched his best agent—you—to get the situation under control. Rumour has it that if you do well in the New World, promotions, fame, and fortune will all be yours! Unbeknownst to the Crown, however, you’ve received an equally compelling offer from the fledgeling nation of the United States. Will you keep your loyalty to the British Empire, or turn coats and fight for a new cause?

Wherever your loyalties lie, this Revolutionary War inspired dress is sure to impress the rustic colonists with its elegant lace trim and decorative buttons. The red velvet tailcoat jacket inspires a commanding presence, whether as a display of British rank, or as a cunning disguise for your spying operations. The convincing foam tricorn hat adds an air of competence, or of care-free fancy when tilted at a rakish angle, while the included ribbon will keep the hair from your eyes should it come to battle.

It seems a life-altering choice lies before you soldier: will you protect his majesty’s holdings and secure the dominance of the great British Empire? Or will you rebel and take a stand with the colonists of the Americas, helping to bring about a new nation? Choose carefully, as much may depend upon your answer. Being an important historical figure is no easy affair, but lucky for you, the Women’s Rebel Red Coat Costume works equally well as a genuine uniform of the crown or a convincing disguise for a spy. Whatever you choose, your secret is safe with us and you’re sure to benefit from owning this gorgeous late 1700s inspired ensemble!