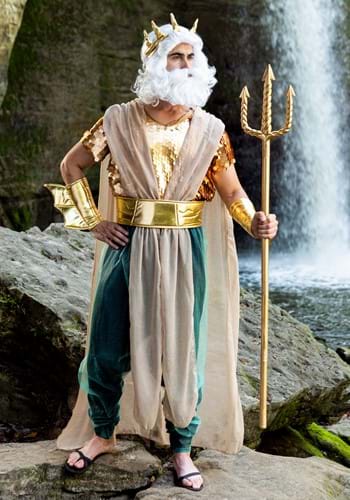 HOIST UP YOUR MYTHIC TRIDENT AND COMMAND THE SEAS

We're not sure when the mantle of godhood became something that could be transferred from one being to the next.  We always thought it was a fairly pre-determined occupation.  But, once the whole 'if ye be worthy, whoever holdeth' sentiments began, things got just a little more open in terms of those opportunities!  Suddenly, folks are jumping all over enchanted objects, aiming to demonstrate their proper authority and strength!

First it was Excalibur.  Then Mjolnir.  Then the Spear of Destiny, the Stick of Truth, the Fork of Spaghetti, and we're still trying to figure out what sort of divinity was bestowed to the bearer of the Unwashed Socks of Bob the Construction Worker.  (We just wish he'd stop wearing them as gloves!)  Anyway, the real point is that we have come upon the mighty Trident of Poseidon and we need to find someone to take it so the office stops flooding!

Now, before we start throwing divine implements out to anyone, we've got to make sure you look the part.  Start off with this Poseidon Men's Costume and we'll see how you rank.  This short-sleeved pullover tunic is fully lined for comfort.  The shirt is covered in mesh with bronze sequins to give you that fresh-from-the-sea look.  The elastic pants have a godly billowing effect thanks to the organza overlay while the long ivory cape assures the noble stature of an oceanic deity.  Finish off the look with a golden belt and the golden coral crown and you might just find the waters ebbing to your decree!

Well, actually, please don't.  That would be crazy destructive.  Instead, just focus on developing those ocean powers step by step and show your might as Poseidon, the Olympian God of the Sea, and brother to the King of the Gods.  Once you're ready for the real power, get your mighty Trident and dominate the oceans!