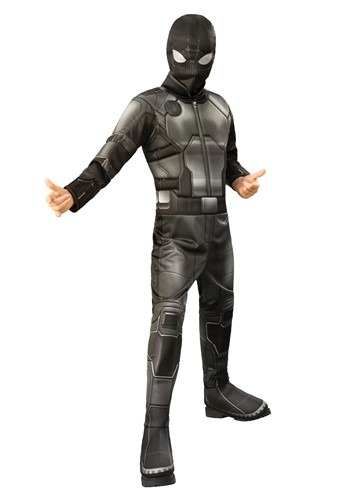 Spider-Man's classic suit might not exactly be practical. After all, he spends a lot of time sneaking around... and his suit is bright red and blue. That's not exactly a color scheme that blends in with the environment. If he started wearing his S.H.I.E.L.D. stealth suit that he wore during Spider-Man: Far From Home, he might just be able to sneak up to bad guys with ease. Of course, he might also have to take up the name "Night Monkey" on a full-time basis (we sort of dig that name).

If your child is looking for a sneaky version of the Spider-Man suit, then this officially licensed costume from the MCU is a great start. It's inspired by the one worn by Peter Parker during his battle with Mysterio's illusions in Europe!

This Kid's Spider-Man Far From Home Deluxe Stealth Costume starts with a full jumpsuit, which has printed details all over the exterior. The suit is designed to look like black and gray armor pieces and it even has the spider symbol on the chest. The suit fits with a fastener at the back of the suit and the legs end in foam boot covers, which are designed to fit over most pairs of shoes! To bring it all together, the costume comes with mask, which has mesh eye holes in the front for vision.

If your child is itching to become their favorite superhero, then this Spider-Man: Far From Home costume is a great way for your child to join the MCU. They might even start doing some super-secret missions for Nick Fury!