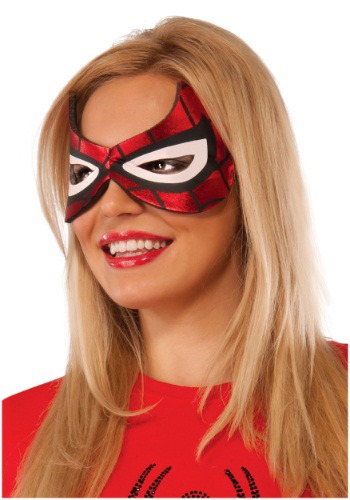 Generally speaking, when you’ve got a male and female superhero with roughly the same kinds of powers, there ends up being a rather unusual difference between their costumes.  And, it seems to us that one of the common features is often a strange lack of convenience and a definite lack of pockets!  Of course, some manage to avoid this trouble.  Bat Girl still gets an awesome utility belt and Supergirl’s shorter cape certainly helps to avoid some common struggles.  But, are they really improvements!?

Of course, all of that changes when we take a look at the difference between the Spider-man’s head-consuming cowl and the Spider-girl’s awesome mask.  All the powers, a bit more respect, and a far more breathable mask?  Yep, Spider-girl definitely wins the contest of the spider superheroes… and so can you with this officially licensed Spider-Girl Eye Mask.  Polyfoam made and comfortable, you’ll slip right into the role of the kick-butt spider-heroine and still be able to show off that smirk as you take the crooks to the clink!