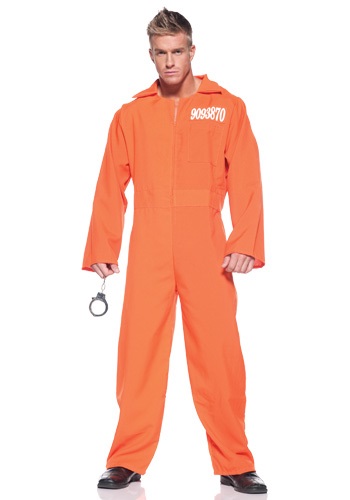 WHAT DID YOU DO?

Great, you're going to prison? What on earth did you do? Did you kill a man? Did you rob a bank? Did you lead the police on a high-speed chase through three counties? Whatever you did, embellish it. Make the story three times cooler than it actually was. That's the trick to surviving prison. We think. We've never actually been. But the movies make us think that having a cool story for being there is a good way to stay safe in there!

So, if you robbed a bank, say that you tried to do it blindfolded. Doing it with your eyes open was getting too easy, so you threw on a blindfold, tied a hand behind your back and went to work. You would have gotten away with it too if you coulda seen them coming. Stories like that are how you make friends once you're on the inside. Good luck!

This costume comes in standard prison orange. The only place this color doesn't stand out is in prison, standing next to a hundred other inmates wearing the exact same thing. Still, we think the color is nice. Puts a little color in the otherwise dreary prison. This jumpsuit has all the details that you'll need to sell people on your costume. It says "department of corrections" on the back and has a prisoner number on the front, so if anyone doubts that you're a real prisoner, you can just point to the number and say "then why did they give me a number?"

When it comes to prison stories, making sure that you have the coolest is essential. So, when you meet your cellmate just listen to their's first, and then one-up them. So, if the led police on a chase through three counties, then you led them through four. Make sense? Good luck!