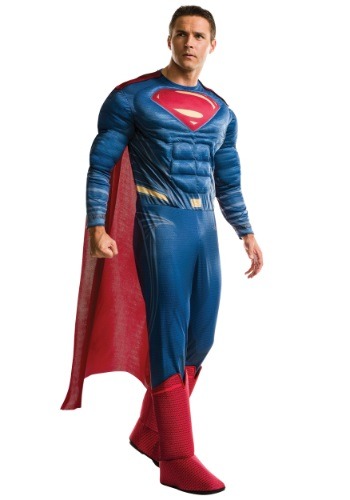 Let's face it. Every kid wants to be a hero at some point or another. Sometimes it's a mutant with crazy powers, or a vigilante with cool toys. Other times they're just some small town hero the kids can relate to. One of the most popular heroes out there? The super-strong alien Kal-el of course. Superman. We're talking about Superman. He can fly, he's super strong, he has laser eyes and x-ray vision. As super heroes go, his list of powers is quite impressive and we can't blame kids for wanting to be him.

You know the main difference between kids and adults when it comes to fans of Superman? Adults have wallets. That's right. That means not only can you geek out any time you see anything Superman, you can decide if you want to buy that new Superman movie. Or that comic, soundtrack, or other paraphernalia. Even better? If you want to you can buy Superman's suit. You could be Superman.

Well not exactly. You still won't be able to fly, but at least you'll look the part in this Plus Size Deluxe Dawn of Justice Superman Costume. This polyester jumpsuit is designed after the Batman v Superman: Dawn of Justice movie. It's got fiberfill sculpted muscles over the chest and shoulders. There's red boot tops, a red cape, and of course, that big emblem we've all come to know and love. So go ahead. Fulfill that dream you've had since you were young and be a superhero for a day. Or forever. Whichever you like.