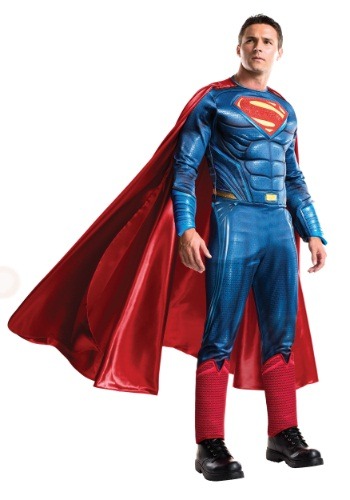 Superman vs. Batman in a fight was a long time coming. Batman said he didn’t trust the all powerful Superman, but we know the real reason he wanted to pick a fight was just to see if he could win it. I guess you could say it was a fair fight. We mean, if we had to go up against a guy who was invincible, we’d want all the kryptonite gas grenades we could get our hands on. A robot suit couldn’t hurt either.

As if life wasn’t hard enough for old Superman. He had to use a mirror to shave himself because only his own eye lasers can cut through his Kryptonian stubble. He once blew an entire solar system to pieces with a super sneeze. It wasn’t on purpose, Mister Mxyzptlk threw magical sneezing powder at him. Come to think of it, maybe fighting Batman was a more grounded experience for Superman than some of his past adventures have been.

Our officially licensed Superman Dawn of Justice Grand Heritage Costume for Men is the real deal. It’s a full body polyester jumpsuit and the boot tops are attached, so it’s very manageable. The chest logo is a molded and painted piece, and the double layered cape is detachable for if you have to go through a revolving door or get on a chair lift when you go skiing. Superman never struck us as a skier, though. Wonder if he’d be any good at it?