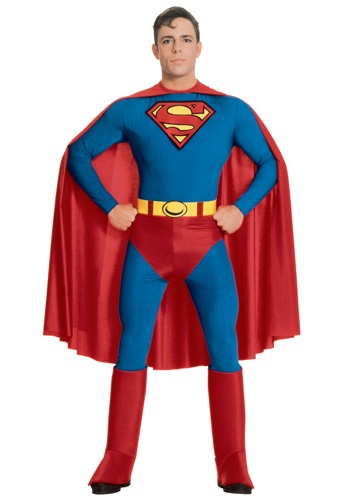 Deep down, everyone wants to be Superman. Why wouldn’t they? Well, the guy won the lottery on superpowers, that’s for sure! If you were Superman, you’d never need to book airline flight again, because you could fly anywhere you wanted to in the blink of an eye. He doesn’t need to buy can koozies, because he can just use his frost breath to keep his drink cool. He can cook a pizza in less than a minute with his heat vision. He’s strong enough to lift the entire Earth’s weight for 5 whole days (seriously, look it up because he totally did that in the comic books). That means he never needs to hire movers when he decides to move into a new apartment.

Unfortunately for us mere mortals, we’ll never get the chance to know what it’s like to have all those superpowers at once. You can, however, get a small taste of what it might be like to look like Superman! All you need is this traditional Superman costume for adults and a solid Kryptonian hero kind of attitude.

This officially licensed costume from DC comes with a red and blue jumpsuit designed to look just like Supe’s classic costume. Of course, the bright yellow and red S-Shield symbol is prominently displayed on the front. It also comes with a cape that’ll help you feel like a super-powered member of the Justice League! It also comes with a yellow belt to pull the look together. So, even though you might be flying anytime soon, you’ll at least be able to strike a heroic pose while wearing this costume for your social media.