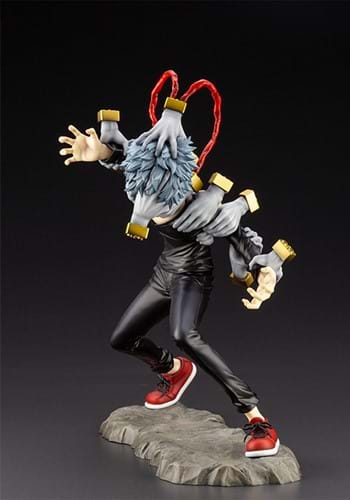 Whether you revere him, like the League of Villains, or detest him, there’s one thing for sure: Tomura Shigaraki knows how to fuel a fire. That motivational skill appears no more straightforward than when used in his costume. The hands of family members—and a couple of punks—grip his arms and head. And where many would expect to see support or comfort, there’s nothing but anger and fear. As if they are still a part of the society Shigaraki hates, the mummified hands positioned to look like they are holding him back are more likely what push him toward achieving his ultimate goal.

Complete your My Hero Academia collection with this dark yet captivating Tomura Shigaraki ArtFX Statue. Modeled after the League of Villains leader in his disturbing costume, this officially licensed collectible inspires an appreciation for the character’s emotional motivations. And with its intricately sculpted details, this must-have My Hero statue perfectly captures the torment and intrigue of the series’ primary antagonist.

Not to be Missed