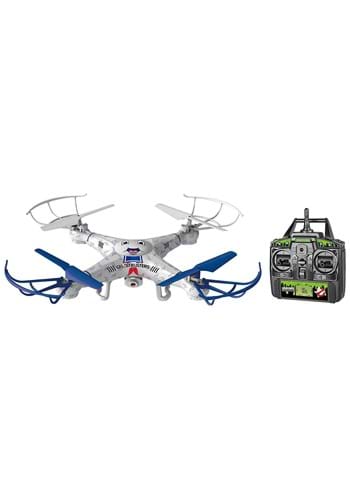 Ray! What did you do? Did you imagine the Stay Puft Marshmallow Man... but this time as a helicopter? This is bad. Soon, he'll be causing all sorts of mayhem in the world and even the Ghostbusters might not even be able to save the day! Oh, hold on a second. This is a toy, not a ghost. It's a good thing... we thought we were going to need our Proton Packs for this one!

This Stay Puft Video Camera RC Quadcopter is officially licensed from the Ghostbusters and totally obeys your command. You won't have to worry about it tearing up New York City like the one from the movie.

This magnificent remote control toy features 3D flight and speed controls. The copter has a design inspired by the villain from the original Ghostbusters film. It requires 4 AA batteries to operate and comes with a picture and video camera. The included remote operates the copter and it even has stunt capabilities. The copter has 4.5 channel built-in gyro to help keep it flying. The toy is intended for ages 14 and older. Just make sure you don't fly this thing around Stantz. There's no telling what sort of bright idea he might get around this thing!