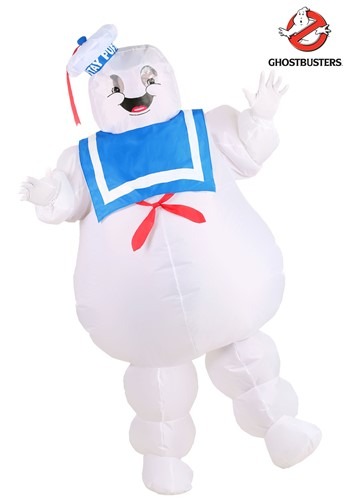 Ray Stantz is a smart guy. After all, he and Egon engineered all of that hi-tech gear to locate, combat, and trap ghosts, rendering them harmless to humans. Unfortunately for the Ghostbusters, and the rest of New York City, his mind NEVER stops working. When Gozer the Gozerian tells you to choose your method of destruction, you blank your mind. Venkman, Zeddemore, and Spengler had no problem clearing out their mind of loose thoughts, but Ray? Well, he starts thinking about marshmallows. That's how you get an 8 story, bloodthirsty version of the Stay Puft Marshmallow Man to show up and he's ready to wreck up the joint!

Well, now it's time for you to transform into an incarnation of Gozer with this officially licensed Ghostbusters costume.

This Ghostbusters Stay Puft Inflatable Costume is an adult-sized costume inspired by the iconic 1984 movie. It comes with an air-tight jumpsuit that has a zipper in back and elastic in the cuffs. The exterior of the costume recreates the look of the monster from the movie The back of the jumpsuit houses a small fan and battery pack (batteries sold separately). Just flip the switch and the costume will self-inflate in minutes—easy peasy! You can even wear your regular clothes underneath.

This year, you can choose the next avatar of destruction... but, if you ask us, the Stay Puft Marshmallow Man is still as good as you're going to get (Ray had it right)! Just make sure that if you do dress up like Gozer's infamous incarnation, you keep an eye out for those Ghostbusters. Those guys are fixing to blast you with their Proton Packs and you definitely don't want that!