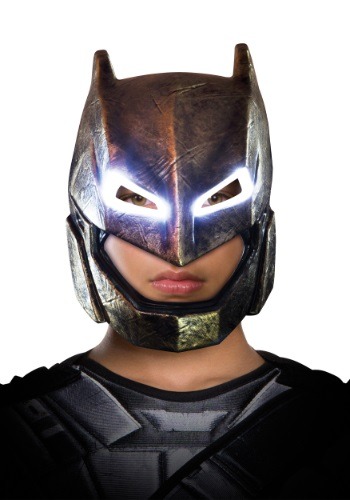 Batman has had to face several pretty daunting villains in his time.  Obviously the Joker, Riddler, and any number of the other Gotham baddies can (and have) presented threats that have forced even Batman to struggle to keep the world safe while also making sure that he’ll be sticking around to face the next day, too!  But, when threats show up that require that extra oomph, you know that Batman isn’t going to be caught unprepared.

So, when your tyke is ready to step up and claim the title of the Batman, you’ll want to ensure that they’ve got everything they need to keep themselves safe, too.  Fortunately, with the increasing intensities of the baddies out there, we’ve upgraded plenty of our gadgets, too.  Your kiddo can look just as ferocious as Batman ever has while also having heightened protection with this officially licensed DC Dawn of Justice Light-Up Armored Mask.  The gleaming LEDs around the eye openings will have any villain thinking twice, because if Batman wasn’t scary enough… an armored and electric-powered one will have them running for the hills.