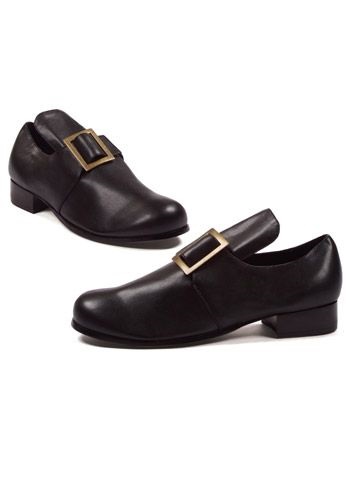 Flashy clothing is for the devil and his witches. At least that’s what the Pilgrims thought, we assume. You won’t find any stripes or flare on the Mayflower, just black and white and the occasional buckle. Yes, the early settlers came to what they called the New World with some rather simplistic sartorial tastes. But we suppose, to their credit, fashion might not have been a priority for a group crossing their fingers for crop growth. Yeah, we would rather eat than look nice, too.

A Buckle to Remember

So sure, most of the clothing worn by this simple bunch of settlers sits far from the forefront of our minds when we think of what to wear. Sometimes, though, simple is elegant. And we think that holds true for these Mens Pilgrim Buckle Shoes. They rock the signature male Pilgrim design feature, even… the buckle! The one-inch heel will turn zero heads, unless you were told to kick off your shoes in the foyer. But that’s the point, isn’t it? You’ll look authentic. Our black faux leather Men’s Colonial Pilgrim Shoes match with any garb from bygone eras, while managing to be comfy, carefully crafted, and just shiny enough to be the least dull item in all of John Smith’s wardrobe.