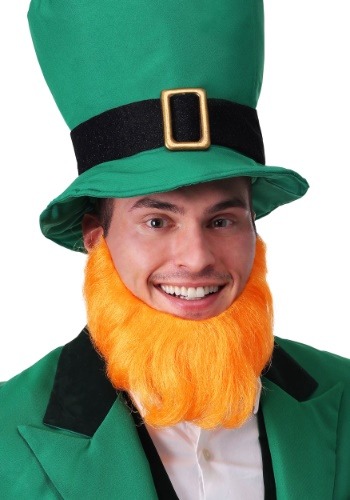 Usually, right around mid-March, folks get a little extra-excited and remember that they should be on the hunt for the elusive and exclusive golden treasure of the leprechaun. They're naturally looking up at rainbows, hoping to catch the faerie creature before it vanishes out of sight with its magical gold. All number of tricks and traps are planned, all in the hopes of finding one. But, there's one important secret that few seem to know. That golden treasure? It isn't coins. It isn't even in a pot. It's the magical beard that grows right on a leprechaun's face!

Make sure that you have all the magic of the season plainly upon your face with this exclusive Leprechaun Beard. This is a Made by Us treasure that we have woven together in our in-house studios to make your season magical. It wears easily with elastic bands and features faux hair in brilliant golden orange. Match it with a leprechaun costume or shock people with the magical truth all on its own!

The Luck of the Irish

Once you know that the real magic of the leprechaun is in the gold of their beard, you will need to safeguard the secret. We highly recommend storing all of the tricks of the trade in this Leprechaun Beard. (Just watch out for those beard tuggings at St. Patrick's Day!)