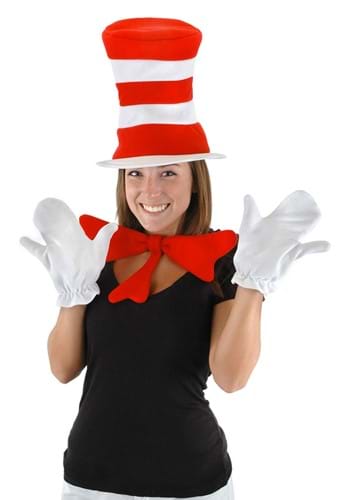 Storybook Cat in the Hat Costume Accessory Kit for Adults

Cats have always been trouble makers so it's no wonder why Doctor Suess chose a cat to be the instigator at Sally and Conrad's house. This cat knows chaos like the back of his weirdly two-thumbed hands. Anyone who's ever had to clean up a house in a hurry is on the edge of their seats as they follow the antics of Thing One and Thing Two. A ring around the bathtub that just keeps spreading and spreading. Gah! Sounds like a nightmare.

This swanky cat in his fancy hat knows what he's doing though. He knows a good party is followed up by a full-scale cleanup. That's what makes him such a class act kitty! So, if you want to play the instigator as well as the hero, you'll love this easy costume kit! You'll get the classic red and white striped top hat, an over-sized red bowtie, and of course, the double-thumbed white mittens. As the Cat would say, "It's fun to have fun but you have to know how!"