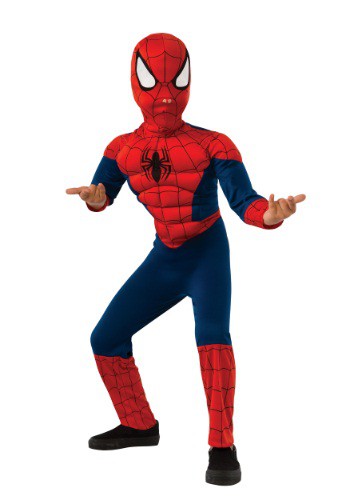 Dreams. We all have them. Do you remember a time when you thought you were going to grow up to battle against the forces of evil? You were going to wear an awesome spandex suit and use your super powers to beat up super villains. Remember? Then you slowly realized that super powers were REALLY hard to get and that spandex isn’t always the most practical material to wear every day.

Well, your kid is about at that age, where he’s strongly thinking about pursuing a career in crime fighting. Do you really want to tell him that it just isn’t a practical dream, or would you rather get him dressed up in this Ultimate Spider-Man costume and tell him, “Go get ‘em, Tiger!”? Yeah, we thought you might like that second option better!

This child Ultimate Spider-Man costume comes with a muscle chest to satisfy any aspiring young superhero. The muscle padding runs from the chest to the shoulders, making your little dude look as buff as a guy who got bitten by a radioactive spider. It also comes with a mask, since you don’t want any villains catching wind of your kid’s true identity. Once your child has it on, he’ll feel tough enough to take on Doctor Octopus (Don’t worry—Doc Ock isn’t real, so your child will never have to fight a dangerous villain like him.)

So, go ahead! Indulge in your kid’s crazy dream of being a superhero for a few more years. Then you can tell them the truth about grown-up jobs!