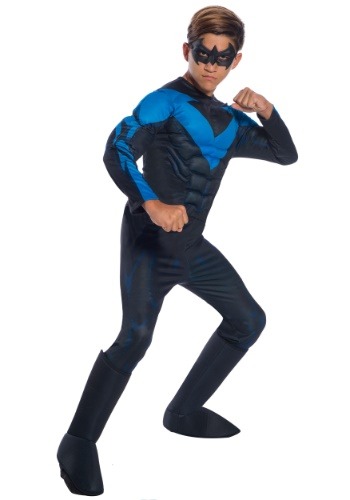 Batman probably teared up. It was an emotional time. He’d watched Robin grow up from a tenacious little squirt into a strapping young team superhero. Then, after plenty of crime fighting and superhero work, he finally graduated from sidekick to solo superhero. He became Nightwing. Of course, that’s what every superhero wants. They want to see their young sidekick grow into a strong, capable hero in their own right, but still… there’s that bittersweet sensation when watching them finally leave the Batcave to strike off on their own. Perhaps Batman had a tiny case of empty nest syndrome when it happened…

Well, you can probably relate to Batman. Your child is growing up a little bit more, each and every day. A part of you wants them to stay a child forever, but deep down, you know that you need to support them in their solo adventures. That’s why your child needs to wear this Nightwing costume, to carve his own path as a superhero!

This child Nightwing costume will help your child escape Batman’s shadow. The costume comes with a black jumpsuit that even has muscle padding in the chest and arms. The front has Nightwing’s signature blue wing design. The attached boot covers fit over any pair of your child’s shoes. The final piece to the outfit is the black eye-mask, which will help your child conceal his secret identity!

Once your child has this costume on, he’ll be ready to take to the streets all by himself. Of course, even Nightwing accepts help from Batman now and again, so maybe you could jump into the fray by wearing one of our other licensed DC superhero costumes to become your child’s backup! Who knows, you might even be able to take down a big baddie like Slade!