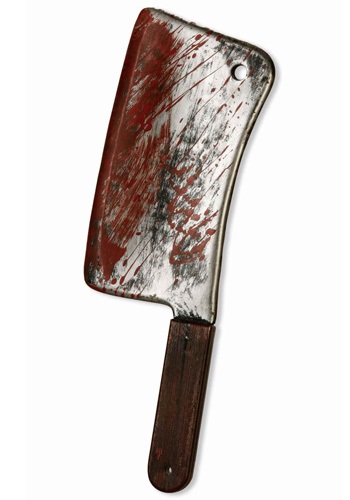 We can see two different ways in which this butcher's cleaver is scary. The first is the most obvious. It belongs to a madman, a crazy butcher that has become a mass murderer and is killing people. So that's terrifying and all, no question there. But the second option is just as terrifying. The second possibility is that this knife is simply the tool of your friendly neighborhood butcher. But, there's a catch: He doesn't ever clean it! Clearly, it's covered in dry blood, so he doesn't intend to clean it. Can you imagine getting food poisoning from a butcher's knife like that? It sure is terrifying to us!

Whatever your backstory, this Butcher's blade is sure to scare even the toughest of folks! It's made of plastic and has a faux wood handle and a faux silver blade. The blade's covered in fake blood splatters, making it look like the tool of a gruesome murderer.

When you go out with this costume, you can threaten to both kill people, and to get them really sick by selling them meats that were processed in unsanitary conditions! How spooky is that? That's a one-two punch of scary!