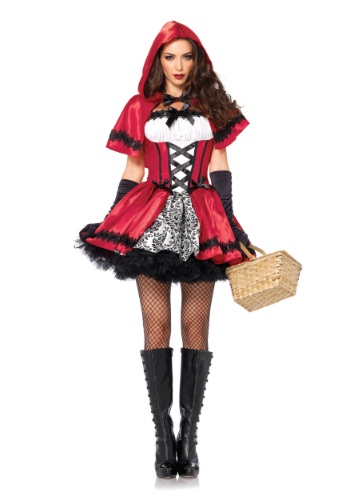 What would have happened if Little Red Riding Hood was a story initially told by Bram Stoker, you might ask? What if it was meant to explore the dark corners of the human mind, just like gothic literature is known to do? Well, for one thing, Grandma probably would be living in a creepy castle, the wolf would have sported some kind of cape with a very high collar, and the woodsman would probably have been  a brilliant, but troubled, heir to a large estate. Oh, and our main character would probably have worn something like this Gothic Red Riding Hood Adult Costume.

Well, maybe not exactly like this costume, gothic fashion tended to be a bit more buttoned up—but this is a much more fun reimagining of the look, don't you think? In this outfit, you are ready to explore the potentially dark meaning behind your favorite story!

Or, at the least, this look is a fun way to sport gothic accents on a modern look! The bold outfit comes with a bodice that has a criss-cross ribbon pattern to mimic the look of a lace up corset. Meanwhile, the skirt has a black and white patterned panel in front, and a dark red layer on top with black lace trim. Included is a matching hooded cape with black lace trim. To accent the style, accessorize with a basket, nylons, or boots to really exaggerate the goth elements of this rebooted story-inspired ensemble!

Thinking about it, Red Riding Hood already has some pretty dark elements to it. Maybe it was originally a gothic story! Either way, now you can show off to everyone how you think the story would go if a dark mind took his hand to it. Just try not to get too dark, people still like happy endings!