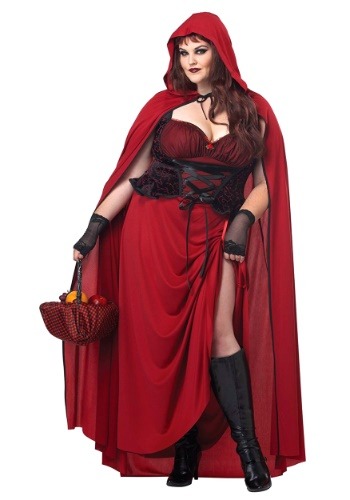 Little Red Riding Hood had it tough and was undoubtedly the victim in her story. But what if she wasn't a victim? Our dark Red Riding Hood costume reminds us of a more bad to the bone version of our favorite storybook character, a version that was not going to be the victim.

We picture this version of Little Red Riding Hood walking into grandmothers house, and instantly realizing what happened. She might play along for a little bit though. She'd walk up to the wolf real slow, ready to attack, but she would say "My my Grandmother, what big teeth you have."  Then, this Little Red would pull out a taser, stun the wolf and then save her grandmother. Had Little Red Riding Hood done this, the story would have been written very very differently.

This floor length pullover dress comes off as sleek and dangerous, and the black satin ribbon only adds to the effect. The dress has ruffles and a small rose accent at the neckline. This costume's most important piece would obviously be the hooded cape. After all, what would Little Red Riding Hood be without her red hood? This red cloak has black edging and ties around the neck with a black ribbon. The black and red scheme of this costume gives it a dark, dangerous feel, and it's exactly why we don't think this Little Red would be a victim at all!

Once you have your costume, all you'll need is your little picnic basket. But this version of Little Red Riding Hood wouldn't carry food. She'd carry a knife, a gun, who knows? Maybe she has an entire arsenal in there, just waiting to get threatened by some wolf who thinks he has found an easy meal and an easy victim. But, this isn't that kind of story.