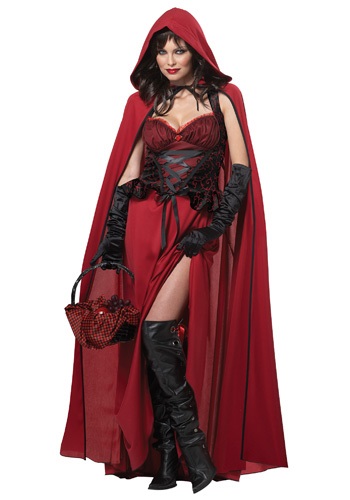 Little Red Riding Hood was unfortunate enough to become the victim. That being said, when we see this costume, we see a version of Little Red Riding Hood that wouldn't have been a victim at all. This Little Red would have seen that wolf for what it was right away. She would have then picked it up and spun it around by the tail like a helicopter until that wolf got so sick that it spit grandma right back up. It's not a pretty sight, but it saved grandma's life, making this Little Red a hero.

If the story had gone this way, things would have been written a little differently. For one, that poor little wolf would have been the victim. The story might have been called "Little pathetic sad wolf" and recounted the tale of a wolf who got beat up by a human. All the other wolves would laugh at them.

This costume turns you into a dark hero of the wood. You'll be wearing a red dress with black detailing around the bodice, and a cloak over that. After all, what would this costume be without a red hood? The cloak hangs all the way to the floor and is tied about the neck, with a hood attached. As an extra finishing touch, we have included the black and red hanky, to be worn however you please! This costume says "Eating my grandma is a bad idea.", which is a fitting statement for this particular character.

If you came home to find a wolf in your grandmother's bed, wearing her clothes, what would you do? We aren't really sure what we would do, to be honest. That is a lot of weirdness to process all at once. We'd probably just get eaten. Oh well, you'll do better than us!