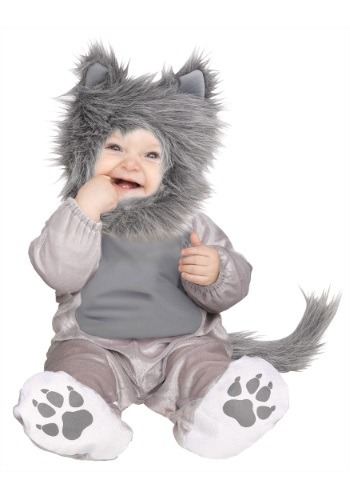 So, you see your little one as something of a wolf pup? Are they a little fierce? They might be young, but you can always tell just how bold they will grow up to be! Do you often find them adventuring as far as they can? (which probably isn't that far, but it's the thought that counts.) Do you often find them putting things in their mouth, even when they shouldn't? Kind of sounds like a puppy, doesn't it?

If they are a wolf pup, that can only mean that you are a wolf! Are you a fierce provider and protector? Are you a teacher and a guide and a friend? If those words sound like you, then it kind of seems to us that wolf costumes were truly meant for you and your little one! We'd chalk it up to fate, but we have a feeling that you might just have great taste in costumes.

This costume will turn your child into a wolf pup, more cute than fierce. They'll be wearing a gray jumpsuit that's been detailed to look like the body of a wolf. It has a darker gray belly and a tail on the back, and the booties on their feet even look like wolf paws! And we haven't even gotten to the best part; the best part of this costume is the hood! It comes all fluffy and covered in faux fur and has two little wolf ears poking off the top.

Have you found your wolf costume yet? In order to pass as a wolf pack, you'll at least need some ears and some whiskers! But, if you want to go all out we have some pretty impressive wolf costumes. Whatever you choose, we are sure you will make one awesome family of wolves!