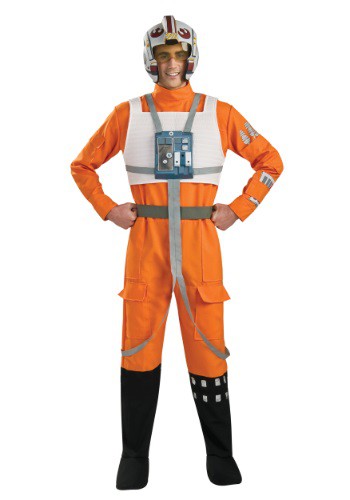 So you headed back home to your 10 year high school reunion, and wouldn’t you know it, Stan Mickels was there--and while you guys are a little old now for him to give you another swirly, or pants you in front of the whole cheerleading squad, the memories of being bullied are rough enough. And what’s that? He was bragging about his new job as a TIE Interceptor pilot?

Ugh, he really is just the worst. We do not advocate pursuing revenge on childhood bullies, but man, now that he’s aligned with the Empire, we do have a good idea for you: throw on this X-Wing Rebel Pilot Men’s costume and join the elite crew of Rebellion pilots. If your skills really are up to par, you may even be able to join Red Squadron, or, even more exclusively, Rogue Squadron. This way, you can fight goodness and order in the universe, as well as against jerks like Stan. If you ever do meet Stan in a space battle, you’ll be well prepared from inside your X-Wing, it is one of the most versatile and effective starships available, after all; and if you’re wearing this outfit, you must have reflexes nearly as fast as a Jedi’s, which could beat any TIE pilot any day.

In this officially licensed costume, you’ll be fully ready to jump into the cockpit of a T-65 X-Wing model at the shortest notice. The classic orange jumpsuit evokes the Rebel cause, as do the red decals printed on the iconic helmet. Now get ready for battle, meet up with Luke and Wedge, and always May the Force be with you against your childhood bully...ahem...but more importantly, the Empire.