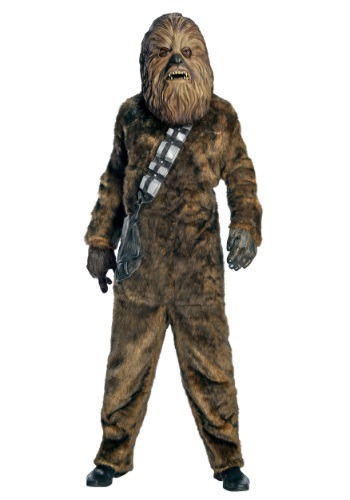 It is hard being the “sidekick.”  Anyone who has been forced to occupy the role for too long will agree.  You do over half the work though almost all of it seems to end up either on the cutting room floor or, at least, you are lucky to even get second billing when it comes to being given credit for the successes that you’re likely largely responsible for!  Hardly fair, especially since when the negotiations were in play, those producers never seem to understand what you’re saying and can you even trust that your council is even translating you correctly!?  Ugh, it is tough to be a Wookie no matter what your role is going to be!

Fortunately, your ‘main guy’ is at least honorable enough that he keeps your best interests at heart.  That isn’t too surprising, we suppose, given the fact that even a scoundrel has that supposed heart of gold, especially this one.  It’s a good thing, too.  Who knows what would have happened to the galaxy if Hans Solo wasn’t going to do right by you, the proud warrior Wookie and master of the bowcaster, Chewbacca!  Now that the rewards are going to be falling into your hands, you better look the part, though!

We’re happy to help suit you up proper with this Deluxe Adult Chewbacca Costume.  Not only is this brown fuzzy jumpsuit the perfect way to keep your fur under control, but the detailed Chewbacca mask will ensure that your facial fuzz stays in the precise style that you want, whether you’re dealing with a Kessel Run, blaster fire, or even the crazy efforts of new students trying to figure out how their Force powers work!  Be ready, though, Chewie.  The years are gonna be rough!  Maybe keep that bowcaster at your side.  Just in case.