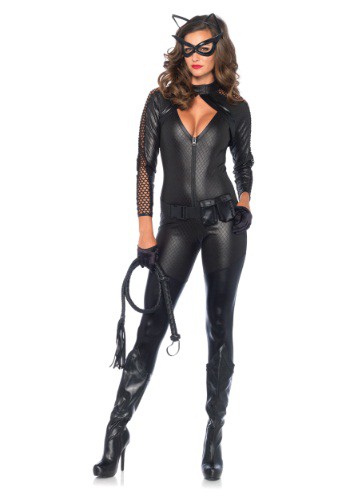 Being a cat burglar would be so cool. And just to be clear here, cat burglars are NOT people that steal cats. Stealing cats would be super mean and super uncool. People would be really bummed if you took their cats, you'd have to be heartless to commit such an atrocity.

No, cat burglars are people that rob others by sneaking in upper story windows or doors on a building! While stealing isn't cool, sneaking around and climbing buildings in the night totally is. Can you climb a house in the dark of the night, with nothing but your tight grip and your whip? You could use your whip to grab an upper story balcony, then climb the rope like a spider up its web. Take your time, go slow, and don't get caught. You'd be in and out in a flash, then you're off across the rooftops, fading into the black.

This costume is perfect for anyone looking to be a wicked kitty this Halloween! You'll be wearing a jumpsuit made of 8% spandex, leaving it incredibly comfortable. The suit has a zipper on the front and a collar around the neck that is secured with Hook and Loop fastener. The shoulders and sleeves are covered with a black netting and the belt around the waist has two pouches for storing any diamonds you might happen upon. To hide your identity, we've included the eye mask with an elastic band to hold it in place. Last but not least, you'll be wearing a plastic headband with attached cat ears. All you'll need to grab now are the gloves and the whip and you will be all set!

Not much for stealing? Good, that's a good thing. Maybe, instead of robbing people, you could give them stuff! Sneak up to their porch and leave a dollar bill behind. You'll get all the rush of sneaking around, and none of the guilt!