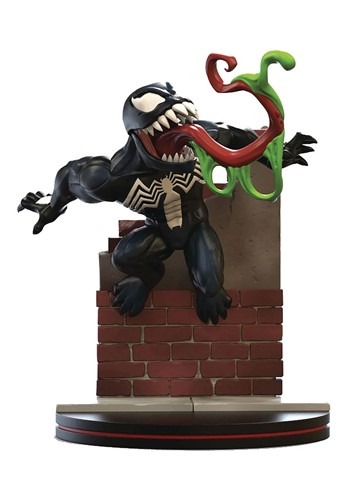 The Symbiote and Eddie Brock go together like chocolate and peanut butter. Well, chocolate with a chip on its shoulder and peanut butter with crazy superpowers and an intense hunger for revenge, that is! That's why that Eddie has held onto the symbiote longer than anyone else in the Marvel universe. During Eddie's long career as Venom, he's terrorized Spider-Man, become an anti-hero, and he's even faced off against his deadly offspring, Carnage! Now, he wants to add a new notch to his belt... joining your collection!

Based on the villain, this Venom Q-Fig Diorama recreates the dangerous character from the Spider-Man comic books. Despite being slightly adorable, this diorama figure still comes with some of his signature features, including a muscular body, the spider-symbol on his chest, and that long, creepy tongue. It even has his sinister mouth, full of deadly fangs, and a trail of "slime" coming off of his tongue. The piece is made out of molded plastic and comes with a decorative base with a backing designed to look like a brick wall from New York City! He's great for any Spider-Man collection, but he also works as a great way to keep any of your Peter Parker figures in check!