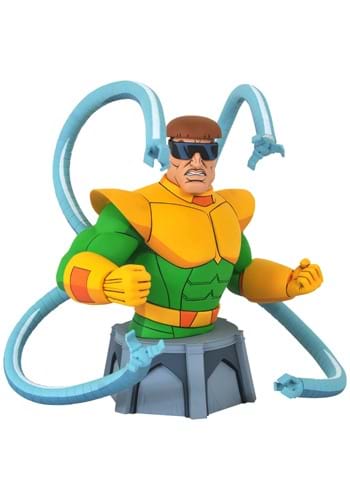 Doctor Otto Octavius has had quite an extensive life, and that is saying something for a comic book character who has been around since 1963. He is the myopic scientist who, after a tragic accident, had mechanical metal arms (of his design) fused to his back. As expected, we went a little mad from the trauma and eventually became an enemy of Spider-Man. Many of Peter Parker's enemies are brilliant, but Doctor Octopus is arguably the smartest (The Green Goblin may have something to say about that, be he can pipe down for now). There was even an instance when Doc Ock swapped bodies with Peter Parker and took over his duties as Spider-Man (he went by the name Superior Spider-Man if you want to check out the comic). It was pretty nice to see a reformed Doctor Octopus. Well, if you are a fan of the classic Marvel animated series of Spider-man from the 90s and are looking for some slick Doc Ock merch, you have to check out our officially licensed Marvel Diamond Select Animated Doctor Octopus Bust.