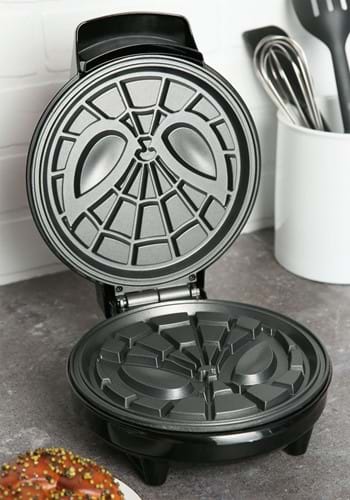 Warm, fluffy, buttery and topped off with a heavy dose of maple syrup, waffles are a superior breakfast food. Nothing beats eating a fresh waffle first thing in the morning, that is, until now. We didn't think waffles were capable of moving up the ranks in the food pyramid of awesomeness (with pizza and tacos at the tippy-top of the pyramid), but thanks to the Spider-Man waffle maker, it's definitely possible. Once waffles are imprinted with Spider-Man's infamous masked eyes, they'll position themselves right next to pizza and tacos. Once this waffle maker becomes a fixture in your kitchen, the already-superior-breakfast-of superheroes can be conveniently devoured daily. It just may tempt you to adopt a superhero persona. Does anyone know if Waffle-Man is already a functioning superhero?... Anyone?

The officially licensed Spider-Man waffle maker makes a 6-inch waffle once the attached cord is plugged into an outlet. The non-stick cooking plate is in the shape Spider-Man's disguised face, featuring his large eyes and webbed masks.

Solidify your new superhero identity by picking up all the waffle-related merchandise we sell. We have Star Wars, KISS and Captain America waffle makers so you can be a true waffle connoisseur.