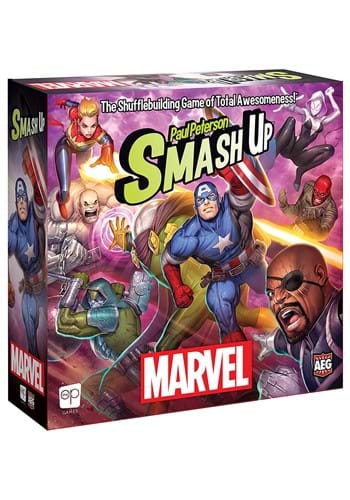 Ever wonder what would happen if Spider-Man and Baron Zemo were forced to work together? Do you wonder what sort of tactics Captain America and the Green Goblin would come up with if they teamed up? Well, Smash Up: Marvel Edition lets you get a taste of some truly wild superhero... and supervillain team-ups! If you're a fan of Smash Up and you're itching for a brand new way to play your favorite deck-building game, then this version is a no-brainer for game night.

Smash Up: Marvel Edition brings you classic Smash Up gameplay with a brand new twist! Just like the normal game, you and up to 3 other players will choose 2 factions based on the Marvel universe. Avengers, Spider-Verse, Kree, Ultimates, Shield, HYDRA, the Sinister Six, and the Masters of Evil are the brand new 8 factions (which are usable with other versions of Smash Up). Once each player has their two faction decks mixed together, you'll take turns battling over bases to gain victory points! Play classic characters like Spider-Man, Iron Man, Nick Fury, and Thor to overpower your opponents! Whoever collects the most victory points by the end of the game wins! It plays 2-4, but we recommend playing with 3!