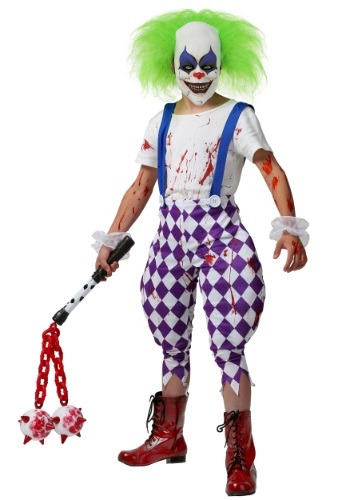 This clown is the stuff of nightmare. Whoever came up with this horrific costume must have had some seriously terrible dreams. We feel bad for them, but we also want to thank them, because this is one of the scariest costumes we carry. One look at this costume in person and we would be running in the other direction. Even now, as we type on our computer, our hands are shaking just from having this terrifying monstrosity on our screen.

We don't even know if we'd be able to get this costume on. Just taking it out of the bag would have us feeling dizzy and desperate to run and hide. As much fun as we would have trying to scare people, we think we would be too scared the whole time to even truly appreciate it. But, if you think you are braver than us, you could have some serious fun with this costume!

This costume will turn you into the stuff of nightmares! You'll be wearing purple and white checkered pants, that have a jagged hemline at the bottom and stuffing on the thighs, giving them a cartoonlike appearance. The suspenders come attached to the pants and are worn over the bloody white shirt. We've also included wrist cuffs to add to your ensemble. Last but definitely not least, is the mask. The mask is smiling, but it looks anything but friendly. This clown is not here to make you balloon animals, we can promise you that.

Now, no one is saying you're not tough. But when you put on this costume, we recommend that you avoid mirrors. Seeing yourself in costume might be enough to give you one terrible scare, and since you're wearing this costume, the clown will be following you wherever you go! So just remember, no mirrors.