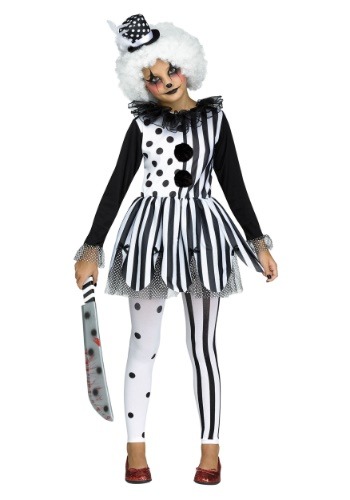 If there was ever a time when we weren't terrified of clowns, that time has long passed. There are simply too many evil clowns out there to trust any of them. Even if a clown doesn't look evil, that doesn't mean they aren't. Clowns have a look to them that makes it very hard to tell when they are happy versus when they are giving you an evil maniacal smile.

This costume will have you looking like a possibly friendly, possibly murderous neighborhood clown. You'll be wearing a Dress that is black and white and half stripes and half polka dots. It has a lace collar around the neck and black sleeves with ruffled cuffs. It also comes with tights that match the polka dot striped pattern of the dress. Lastly, we've included the hat. The hat is held in place with a headband, which will help it stay on through whatever terrible games you play with your victims. This whole ensemble feels friendly yet malicious, a combination that is all to suitable for a clown.

When you dress up as this clown, you'll have to choose what kind of clown you want to be. Are you the kind that makes children smile with balloon animals, or the kind that terrifies the world with a funhouse of horrors?