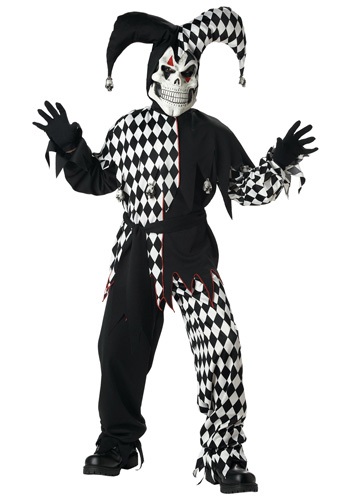 Well, we can't think of anything more terrifying. Like we've been trying. Monsters with chainsaws-for-hands? Meh. Feral beasts with boils and sores? Gross, but not scary. A killer? Yeah, okay, getting spookier. But still. Nothing, nothing compares to this: A spooky clown.

See clowns are terrifying to begin with. What with their strange clothes, violent coloring, and over-exaggerated features, they've never sat well with us. We can't look them in the eye without getting a case of the heebie-jeebies. And now what have they done? They took a clown costume and intentionally made it scary. That's right. That's like... double the scare. Just in case your little one didn't think that being a terrifying clown was enough, now they can be an evil clown. Excuse us while we run for cover (and pay no attention to the group of FUN.com employees shaking behind the curtain).

So we're obligated to tell you about this horrifying costume in detail, but we're going to do it with our eyes closed if that's alright with you. That's better. So our Kid's Dark Jester Costume is made of a polyester knit fabric in mostly black. The left leg, left arm, and right part of the body, however, are covered in a black-and-white diamond pattern.  Both the shirt and pants have elastic cuffs with tattered jagged edges, and the bottom hem of the pullover shirt is tattered as well. The hood has stuffed jester crescents on top with small skulls dangling from the ends and a large raggedy-edged collar. It also comes with a solid black waist sash and a molded vinyl mask that looks like a skull.

There you have it. One terrifying outfit for your kid (who apparently wants to scare the pants off everyone). Now, if you and the creepy clown would move along, we would really like to uncover our eyes now. Is the coast clear?...