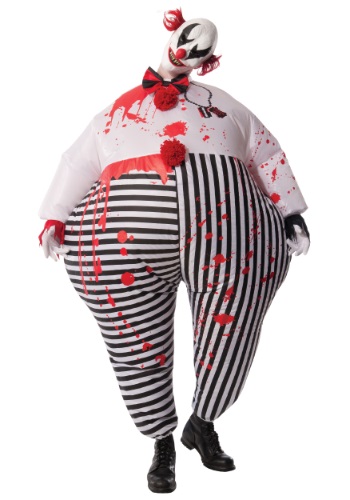 This costume is one of the most terrifying costumes we have seen in a while. Typically, inflatable costumes are comical. We thought maybe this one would look a little comical, being that it's an inflatable clown and all, but nope. Definitely not. This costume is purely terrifying, not the kind of thing you wear to a child's birthday party.

The only reason we will even be able to sleep tonight is because we keep using one little tidbit to console ourselves; This clown probably couldn't fit through doors. We'd be scared of him sneaking into our room at night, but we honestly don't think that he could. The hips are a little too wide for them to sneak into our room. They might try, but we will wake up the second we hear the hissing of the inflatable scraping past the door frame. Another inch and he's stuck. We are going to end up having to help the poor clown out of the doorframe. Oh, how the tables have turned.

This costume will transform you into one of the scariest clowns we have ever seen. And that is saying something, considering we sell a lot of costumes! For all of its size, this costume as actually incredibly simple. It's just a jumpsuit with a fan attached. Simply turn on the battery-powered fan and watch the jumpsuit fill with air, leaving you with comical proportions! To finish out your costume, we've included the mask as well.

Clowns have consistently become scarier and less friendly. This is a shame. But, we must admit, they are almost better at being scary than funny! This costume will leave people with very mixed feelings. After all, they are a scary clown, but they are also inflated to the size of a massive balloon... How is anyone supposed to process this?