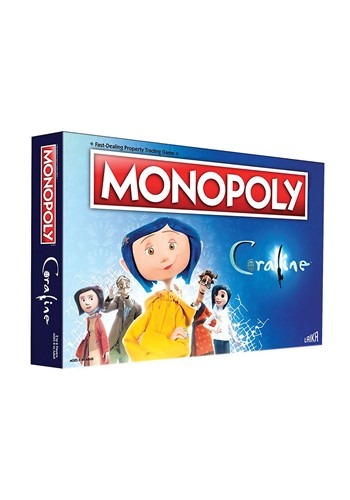 To the Other World

We often look at our own world and wish that we could have things just a bit different. Maybe live in a different house. Maybe even have some different family members. Heck, sometimes we imagine what it might be like to live in an entirely different world. Rather than jump through strange portals and risking serious danger, let's try something simpler first!?

Learning all the rules of the Other World is really tough! Fortunately, knowing how to play the Monopoly: Coraline Edition game is going to be second nature! You know most of the rules already. Pass GO! for cash. Watch your funds and acquire as collections as you can. It's the same Monopoly you already love but with the creepy aesthetic of Coraline. Pick your figure from a host of items that helped Coraline in the Other World and gather up characters and iconic objects instead of street names. Just watch out for the dangers that come from this Other Mother!

Everyone has their favorite Monopoly piece to play, but things are going to get pretty wonky when you play this version from the Other World! Honestly, should you want the button figure or is that the one to avoid!? We aren't even sure!