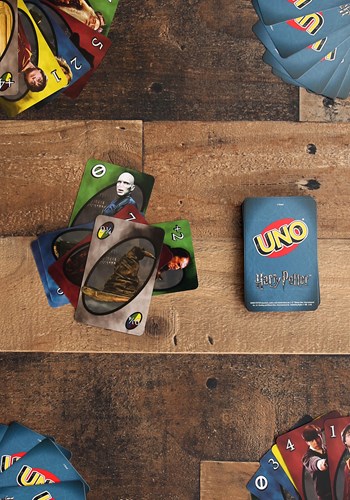 Life at Hogwarts is usually pretty busy, especially when Harry Potter is around. Drama follows that kid so closely that he can hardly do the cupid shuffle without knocking into someone who wants to curse him. And when he's not trying to save the world from the whims of an evil wizard he and his friends are playing Quidditch, studying for the O.W.L.s, or diving into the mysteries of the magical world. Now, that's all well and good but kids need to have bonding, competitive downtime! This card game would be a hit in any house, whether they're the chill kids in Hufflepuff or they're scheming in Slytherin, they could all use a break from the stressful life of magicking and spell casting with this classic card game.

If you love Uno (most fun-loving people do) you'll know the ins and outs of this game! The laminated cards all have detailed artwork from the movies to make them all Harry Potter themed. Introduce Harry Potter lovers to this classic card game and you'll find this Uno game gives two to ten people hours of entertainment!

Are you ready to have a blast with a Harry Potter twist? You won't be able to help but play round after round of Uno. Is it more exciting than a wild game of Quidditch? Well, let us know after round seven!